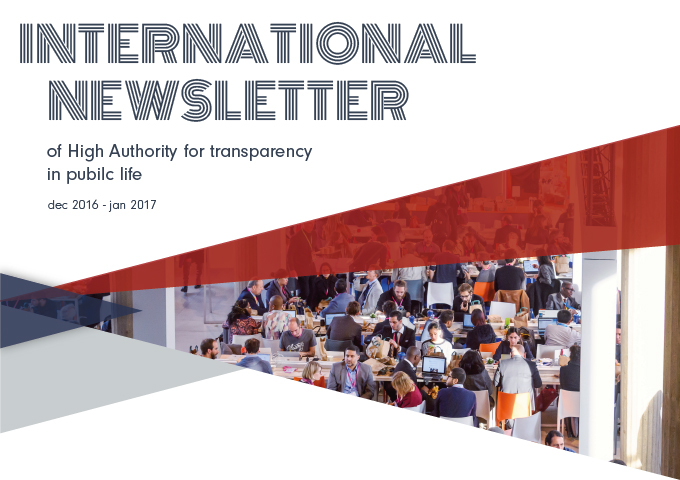 The action of the High Authority is implemented in an international context marked with news and increasing attention to issues such as corruption, promotion of transparency in public life and integrity of public officials. Following to important affairs uncovered in 2016 such as the Panama Papers, the Bahamas Leaks or the Car Wash case in Brazil, news in January 2017 highlight the works, efforts and reforms that are led not only at the international level, within international organizations and civil society, but also at the national level, regardless of the continent considered.


On the International anticorruption day, Rolf Alter, director for public governance and territorial development, published a column on the relation between promotion of integrity and inclusive growth underlining that public decisions biased by peculiar interests affect not only citizens’ confidence but also economic growth.

On 9 December 2016, the World Bank launched its latest publication « Getting the full picture on public officials: a how-to guide for effective financial disclosure », online and during a presentation to founding members of the Network for integrity in Paris. This study establishes a panorama of financial disclosure schemes in more than 160 countries.


On 9 December 2016, in parallel of the Global summit of the Open Government Partnership, in Paris, and on the invitation of the President of the High Authority for transparency in public life, 14 institutions in charge of the fight against corruption and promotion of integrity, from 14 different countries, decided to gather to create the Network for integrity.

Council of Europe: reports of the GRECO

In its interim compliance report on the Netherlands, the GRECO concluded that the country had progressed in terms of prevention of corruption in respect of members of the parliament, judges and prosecutors with three out of seven recommendations implemented or satisfactorily treated. On transparency on political parties funding (third evaluation cycle), the GRECO published its second compliance report for Greece and Italy in December 2016. In Greece, it concluded that the situation has not changed over the past eighteen months. In Italy, the GRECO noted significant progress. It published its second interim compliance report for Cyprus, highlighting progress, and its fifth compliance report in this field for Denmark, concluding that the situation has not evolved and that actions and implementation of the recommendations were unsatisfactory.


In January 2017, the GRECO recommended that the United States prevention of conflicts of interest scheme for members of the Congress, judges and prosecutors. It also recommended that Georgia pursue its reforms and finds unsatisfactory the action of Belgium in corruption prevent in respect of members of the parliament, judges and prosecutors. Last, in its report of 19 January, the GRECO congratulates Italy on the measures adopted in the last few years to fight corruption and highlighted « the determined leadership and proactive role of the Anticorruption Authority (ANAC) ».

For a European whistleblowers protection

The Budgetary control committee of the European Parliament called for a better protection of whistleblowers at the European level, in a press release on 9 January 2017.

The application process for the European Ombudsman Award for Good administration is open until 31 January 2017. It will recognize the work of an agent, of a team or division with a visible and direct impact for citizens of the EU in terms of good administration.

The European Ombudsman drafted “Practical guidelines for public officials’ interaction with interest representatives” and invited to comment them until 28 February 2017.

In December 2016, a few days before the OGP global summit in Paris, and a few days after the letter of intent of Germany, the OGP welcomed a new member country: Luxembourg.

On 25 January 2017, Transparency International published its annual report and corruption perceptions index, aggregating results notable from the World Bank, the African development bank, and the Bertelsmann Foundation among others. France keeps its 23rd position. Italy and Romania progress. The ranking is affected by a certain number of declines, and notably Qatar, strongly downgraded after corruption allegation on the 2022 football World Cup attribution. Nordic countries keep dominating the ranking.

On 18 January 2017, the President of Kenya appointed the new President of the Ethics and Anticorruption Commission (EACC), former archbishop Eliud Wabukala, after approval of the members of the parliament. He replaces M. Kinisu who had been forced to quit in August 2016 after fraud suspicions.

The ethics Commissioner of Canada, Ms. Mary Dawson, opened an inquiry on Prime Minister Justin Trudeau’s holidays at Aga Khan’s, in the Bahamas at the New Year, to verify whether he breached or not the federal ethics law.

On Tuesday 3 January 2017, Republican Congressmen voted to reduce powers of the Office of Congressional Ethics, independent institution created in 2008 and tasked with investigations on ethical violations of elected officials, before backing down a few hours later.

During his speech on 11 January 2017, The United States of America president-elect detailed the measures he has undertaken to prevent conflicts of interest. He hands over the management of his society to his sons, a solution that does not satisfy the Director of the Office of Government Ethics who asked him to sell his shares. An non-governmental organization gathering experts on corruption and ethics filled a federal lawsuit against the President, on Monday 23 January 2017, for violation of the American constitution.

On 27 Decembre 2016, The Ministry of Justice announced that former President of the Republic (2007-2015) Cristina Kirchner, has been charged. She is suspected of illicit association and fraudulent administration in connection to public works funds.

On 3 January 2017, former chief of the executive (2005-2012) of the special administrative region ancien Donald Tsang’s trial opened. He faces charges notably for accepting gifts from powerful businessmen in the exercise of his functions.

On 28 December, the President Xi Jinping announced that the fight against corruption in China was about to reach a “crushing momentum”, after more than four years of actions. Experts nonetheless call for measures for an independent and transparent supervision to protect from corruption the team and work of the Central Commission for Discipline Inspection of the Party.

After the legislative elections of December 2016 and three days only after Sorin Grindeanu’s new Government took office, on 7 January 2017, the citizens’ ombudsman challenged the law that prevent already condemned elected officials from occupying functions in a Government. He referred it to the Constitutional court pretending it would be contrary to the constitutional principle of balance of power.

Claude Parmentier, resigning deputy chief of staff of the Wallonia local administration Minister, Paul Furlan, would have received important revenues as an administrator, in his private capacity, at Nethys, an operating subsidiary of Publifin, a financial holding in Liège (medias and communication, energy production et distribution). This revelation of a potential conflict of interest intervenes in a context when Wallonia  had not fully implemented some schemes entrenched in the law to prevent such situations, and a few days after the publication of a critic GRECO report on federal dispositions. 4 administrators from the Party « Centre démocrate et humaniste » within the intercommunal structure Publifin-Nethys resigned a few days after and a motion of no confidence against Wallonia Minister Paul Furlan was launched on 23 January. He resigned on Thursday 26 January 2017.