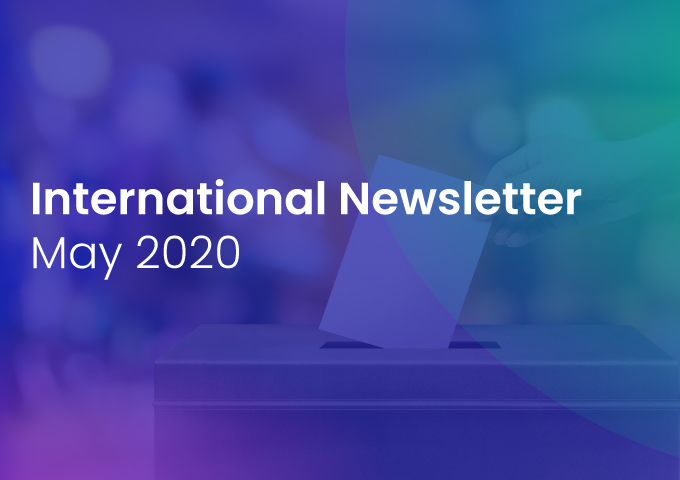 Amid an apparent slowdown in the spread of Covid-19 across certain parts of the world, revelations of public integrity violations in the context of this global health crisis are rising. In May for example, the Bolivian health minister was arrested in connection with a case involving misappropriated public funds during ventilator procurement and the Tunisian authorities have been criticised for irregularities in the purchase of masks from an MP.

That said, although the health crisis has long seemed to overshadow other issues at an international level, the European example shows that transparency is once again a priority: the resumption of negotiations on the European Union’s transparency register, the draft guidance on the use of private sponsors by the Council’s rotating presidencies and the findings of the European Ombudsman’s inquiry that the European Banking Authority should not have allowed its former Executive Director to join a financial lobby association are all positive steps forward in the construction of a more ethical Europe.

After the Council of Europe and the Financial Action Task Force, the OECD has also published a policy brief on strengthening public integrity during the Covid-19 crisis. The guidelines assess the main risks associated with the health context (corruption, fraud, price gouging, irregularities in public procurement, etc.) and set out short- and long-term measures to address them, with a particular focus on procurement strategies, the resources allocated to internal auditing and integrity strategies in public organisations. (OECD, 19 April 2020)

The transparency of European institutions is still high on the agenda despite the attention being devoted to the Covid-19 crisis. According to the news platform Contexte, talks on the lobby register are set to resume on 16 June, the date envisaged by the negotiators of the European Parliament, Commission and Council. Aimed at extending to the Council’s rotating presidencies the obligation to only meet lobbyists on the register, these talks were finally called off in 2019 after a long period of deadlock. (Contexte, 29 May 2020)

Council of the European Union

The Council of the European Union (EU) is poised to draw up guidance on the use of private sponsors by rotating presidencies after widespread criticism, particularly levelled against Croatia, about companies that pay money or provide services to States while they are holding the Council presidency. The 27 EU ambassadors reached an agreement in early May to include a specific text on this issue in the manual handed out to each capital ahead of its presidency. Contrary to the European Ombudsman’s initial proposals, the recommendations set out are not binding. France, Spain and the Czech Republic still have misgivings, however: Paris, in particular, has contended that the choice of whether or not to accept sponsorship is a matter for each capital. (Contexte, 5 May 2020) (EuObserver, 29 May 2020)

Following an inquiry, based on a complaint, the European Ombudsman Emily O’Reilly has found that the European Banking Authority (EBA) should not have allowed its former Executive Director to become CEO of the Association for Financial Markets in Europe (AFME). The Ombudsman also concluded that the EBA did not immediately set up sufficient internal safeguards to protect its confidential information when the planned move was confirmed. According to her, “This case involved the Executive Director of an EU agency, which is tasked with devising rules to regulate and supervise European banks, moving to a lobby group that represents the wholesale financial sector. This group quite obviously wishes to influence the drafting of those rules in its members favour. If this move did not justify using the legal option, provided under EU law, to forbid someone from moving to such a role, then no move would.” (European Ombudsman, 11 May 2020)

A « Group of Concerned Staff Members of the African Development Bank (AfDB) » has alleged that its President, Akinwunmi Adesina, used the bank’s resources for self-promotion and personal gain. Adesina is also accused of paying out disproportionate severance packages to AfDB staff who resigned mysteriously, and favouring his fellow Nigerians. These claims have sparked heated debates. Whereas the institution’s Ethics Committee conducted an investigation and declared that Mr Adesina was « totally exonerated of all allegations made against him », US Treasury Secretary Steven Mnuchin has signed a letter to the Board rejecting the findings of this internal investigation. (Le Monde, 9 May 2020) (BBC, 30 May 2020

After a fact-finding mission, in a press release dated 5 May the members of the European Parliament’s Budgetary Control Committee have demanded that the Czech Prime Minister Andrej Babis “renounce to participate in budget-related negotiations in the European Council until his potential conflict of interest is fully resolved”. They say that “A Prime Minister or a member of a government cannot be a beneficial owner or still control a big conglomerate such as Agrofert Group and at the same time receive large EU subsidies while being involved in the programming and financing of the concerned subsidies.” If the conflict of interest is confirmed, “he must resolve it by either selling his business interests, stop receiving any public subsidies or funding distributed by his government including EU funds, or stepping down as Prime Minister”. (Europarl, 5 May 2020)

The Vatican now has a unique code for managing public procurement and contracts. This detailed legislation takes on board the United Nations Convention against Corruption signed in Merida (Mexico) and replaces the previous regulations already in force, now encompassing all of the Holy See departments which did not previously have their own legislation governing procurement and contracts. Measures are taken to counter conflicts of interest, unlawful competition and corruption, in a bid to avoid “distortions of competition and to ensure equal treatment of all economic operators”. (Vatican News, 1 June 2020) (Al Jazeera, 1 June 2020)

Marin Mrčela, President of the Council of Europe’s Group of States against Corruption (GRECO), has written to Ukraine asking the authorities to guarantee the operational independence of the National Anti-Corruption Bureau of Ukraine (NABU). The draft law proposing amendments to the legislation on NABU, particularly as regards the grounds for dismissal of the Bureau’s Head, has sparked concern at GRECO. The Group gives a reminder that NABU “should be shielded from improper influence or pressure to guarantee its operational independence, fully addressing the requirements of GRECO recommendations”. (COE, 6 May 2020)

In Tunisia, the coronavirus has laid bare certain irregularities on the part of the authorities. In particular, a contract has hastily been awarded to a businessman, who is also an MP, to manufacture two million masks – a clear conflict of interests which has drawn criticism from Parliament. Similarly, difficulties affecting wheat supplies have partly been caused by favouritism owing to links between well-established cartels and the authorities, and by diversions of goods towards the black market. (Le Monde, 15 May 2020) (Arab Reform Initiative, 22 May 2020)

Saudi Arabia has filed a total of 117 administrative and financial court cases against employees having attempted to exploit government institutions over the past month amid the coronavirus pandemic. The kingdom’s Control and Anti-Corruption Authority (Nazaha) discovered widespread corruption and clandestine deals among government officials who broke the authorities’ current laws on combating the spread of the virus. In one case, several staff members of the Saudi health ministry received bribes for leasing hotels so as to house individuals who are being quarantined. (Middle East Monitor, 19 May 2020)

In the Democratic Republic of Congo (DRC), despite the recommendations of the Higher Audiovisual and Communication Council (CSAC), MPs, press attachés and political staff members are still working as journalists on the side. The CSAC urges its colleagues and their media outlets to show responsibility, at a time when political involvement is calling into question the independence of many of the country’s journalists. (RFI, 10 May 2020) (Teller Report, 10 May 2020)

Bolivia’s health minister, Marcelo Navajas, was arrested on 20 May on suspicion of corruption during the procurement of ventilators for Covid-19 patients. The USD 5m allocated to the country by the Inter-American Development Bank (IDB) has paid for the purchase of 170 ventilators, at USD 27,683 apiece, from a Spanish company. And yet the difference between the purchase price via a third party and the normal price charged by the Spanish company (between USD 10,312 and 11,941) has sparked outrage among the public and suspicions of personal gain. The scandal erupted when doctors complained that the devices had not been designed for use in the intensive care wards of Bolivia’s hospitals. (L’Express, 20 May 2020) (Reuters, 20 May 2020)

In Australia, Nev Power, the head of the Morrison government commission tasked with outlining plans to revive the economy after the Covid-19 crisis, has had to step down from his position as deputy chairman of a gas company owing to conflict of interest concerns.

The decision comes after Guardian Australia asked the commission how Power was managing his apparent conflict of interest as commission chairman and deputy chairman of Strike Energy, a West Australian company that is developing a gas field in the south-west of the state. The suspicions over a conflict of interest have particularly arisen because of the commission’s active promotion of gas as a key way to boost post-Covid-19 economic growth. (The Guardian Australia, 23 May 2020)

Papua New Guinea’s former prime minister, Peter O’Neill, was arrested on Saturday 23 May in Port Moresby, accused of corruption. Investigators are asking him to explain the purchase of two electricity generators from an Israeli company, for more than €13m, allegedly without putting the sale to tender and without parliamentary approval while he was in office. Dating back to 2013, this case comes on the back of a string of other embezzlement and corruption allegations, all of which O’Neill has denied. In 2011, soon after taking up office, he had caused a scandal following the purchase of 40 Maseratis for an Asia-Pacific summit he was hosting, when most of the population has no access to electricity. (RFI, 24 May 2020) (The Guardian, 24 May 2020)