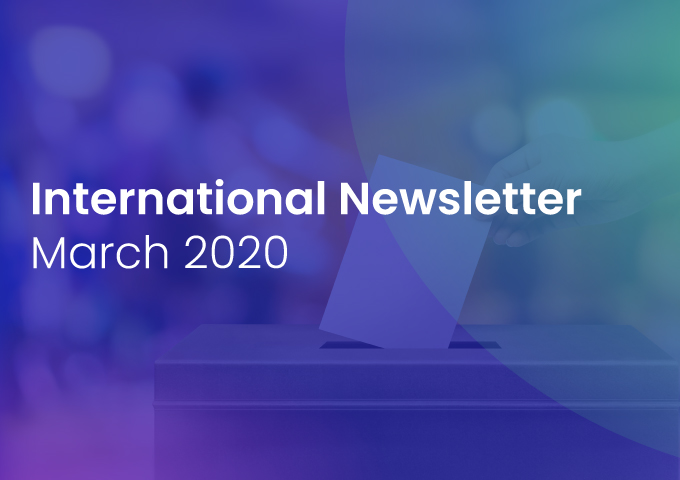 The international situation in March was dominated by the Covid-19 pandemic affecting the planet. This global health crisis, which has required States and international institutions to take unprecedented decisions, reminds us of the importance of transparency in the decision-making process, to ensure that citizens can trust their governments. It also raises the question of how to reconcile fighting the virus with respect for democratic values. In Hungary, for example, the Prime Minister, Viktor Orban, has assumed full powers for an indefinite period.
Meanwhile, a number of investigations and convictions of senior public officials suspected of corruption and misappropriation of public funds also made the news in March. In Slovakia, for example, 13 judges, including the Acting President of the Supreme Court, were arrested on charges of corruption and brought before the Constitutional Court, sending a strong signal following the anti-corruption party’s victory in February’s legislative elections. For probably less laudable reasons, on Crown Prince Mohammed Ben Salman’s orders the Saudi authorities also arrested and charged four princes of the royal family, as well as a number of influential figures, with corruption and conspiracy against the established authorities.

In their final press release at the G20’s virtual summit on 26 March, and in response to the coronavirus pandemic, the planet’s 20 biggest economies called for solidarity, transparency and cooperation with international institutions to “restore confidence, preserve financial stability and revive growth”. At the same time, the member countries announced their plans to inject more than $5,000 billion dollars into the global economy to counter the social, economic and financial repercussions of the pandemic. (L’Obs, 26 March 2020)

The shortage of respirators, masks and other medical tests has created an unprecedented situation of competition between countries and, within States themselves, between public buyers, thus exacerbating the health crisis. No longer a question of transparent tenders, across the planet direct negotiations are now taking place, often accompanied by a predictable train of favouritism, embezzlement and overcharging, and paving the way for future disputes. This observation was made during an online conference on 23 March, “Public Contracts and the Covid-19 Coronavirus”, which brought together public procurement specialists from a number of countries. (Le Monde, 30 March 2020)

The cascading revelations concerning the secret fortune held by Juan Carlos in Switzerland have forced his son, King Felipe VI, to react. To put an end to the scandal and protect the monarchy, the current King of Spain decided to cut his ties with his father. In a press release published on Sunday 15 March by the Royal House, Felipe VI renounced his inheritance from the former monarch, aged 82, and also withdrew funds amounting to almost €195,000 per year, usually allocated to the “retired” king as part of the royal family’s budget. (Le Monde, 16 March 2020; CNN, 17 March 2020)

At the height of the coronavirus outbreak, Viktor Orban has assumed full powers. The Hungarian Prime Minister passed a law allowing the government to legislate on all subjects by decree, suspend elections and derogate from any law for an indefinite period. The law also provides for five-year prison terms for spreading fake news about the virus or about government measures. During his ten years in power, the Budapest strongman has multiplied his attacks on the rule of law in the field of justice, civil society and the freedom of the press. (Libération, 31 March 2020; Foreign Policy, 31 March 2020)

The French distributor Auchan’s Russian subsidiary has been shaken by a corruption scandal. Me Alexeï Jarkov, the anti-corruption expert in charge of the investigation, has drawn attention to corruption mechanisms involving rigged tenders, artificial price increases, favours in exchange for the promotion of products and other irregularities in its quality department and financial control which would explain the group’s heavy financial losses in Russia (losses of €14 million in 2019). Tasked with handling the affair, Me Jarkov was eventually dismissed after having been the victim of an attack. (L’opinion, 06 March 2020).

Following the OLaNO anti-corruption party’s victory in the legislative elections on the 29 February, a number of judges, including the current Acting President of the Supreme Court and a former secretary of state for justice, were arrested on 12 March. They are charged with “corruption, interference with the independence of the courts and obstruction of justice” and were brought before the Constitutional Court. Such a wave of arrests at the highest level of the judicial system is unprecedented in the history of democratic Slovakia. To varying degrees, all these magistrates have been questioned in recent months in the local media concerning their links with Marian Kocner, a powerful member of the mafia who is accused, amongst other things, of having ordered the assassination of the investigative journalist Jan Kuciak in February 2018. Arrested and charged with murder, M. Kocner is currently on trial. (Le Monde, 12 March 2020; OCCRP, 12 March 2020)

The Swedish bank Swedbank, targeted by the financial authorities on suspicion of money-laundering, saw some €37 billion transit through accounts held by “high risk” clients in the Baltic countries between 2014 and 2019, according to an independent report ordered by the bank. The bank was fined more than €350 million and now faces prosecution in the United States. (Le Figaro, 23 March 2020; The Financial Times, 23 March 2020)

The Court of Appeal in Algiers sentenced two ex-prime ministers from the Bouteflika era, Ahmed Ouyahia and Abdelmalek Sellal, to fifteen and twelve years in prison respectively, following an unprecedented corruption trial. On Wednesday 25 March, the Court of Appeal confirmed the sentences passed on 10 December 2019 against these close friends of Mr Bouteflika. (Le Monde, 25 March 2020; AllAfrica, 25 March 2020)

Senior military officers, influential figures, judges and four members of the Saudi royal family have been arrested in a purge led by Crown Prince Mohammed Ben Salman. The Saudi authorities announced that they had carried out an extensive investigation targeting hundreds of individuals accused of offences ranging from financial corruption and the trading of favours to serious administrative offences. This new purge within the royal family appears to be designed to facilitate Mohammed Ben Salman’s accession to the throne in Riyadh, by putting potential troublemakers out of action. (Le Point, 11 March 2020; The New York Times, 6 March 2020)

President Ramaphosa was cleared by the courts concerning an electoral donation of €27,000 from an industrial group. The mediator of the Republic, in charge of the fight against corruption, had accused Mr Ramaphosa of lying about the origins of some of the funding for his 2017 campaign for the presidency of the African National Congress (ANC). (Agence Afrique, 11 March 2020; OCCRP, 11 March 2020)

On 23 March in the Democratic Republic of Congo (DRC), former Minister of Health Oly Ilunga Kalenga and his financial adviser Ezechiel Mbuyi Mwasa were sentenced to five years of forced labour for the embezzlement of over $400,000. This money was intended for the response to the Ebola virus in the eastern part of the country. The Court of Cassation sentenced the accused to five years of “forced labour” and the deprivation of their civil rights. As forced labour is not formally applied in the country, the ex-minister and his adviser will have to serve their sentences in prison. (RFI, 23 March 2020; Jeune Afrique, 23 March 2020)

The former president of the Ghanaian Football Federation, Kwesi Nyantakyi, was officially charged with fraud by a high court in the capital, Accra. He is accused of having unlawfully collected $65,000 in order to grant a favour to a potential sponsor of the Ghanaian Football Federation and of having requested $12 million to influence the attribution of contracts to sponsors. FIFA internal justice had already banned Kwesi Nyantakyi for life from all football-related activities, and in late 2018 had also sentenced him to pay a fine of 500,000 Swiss francs (around €440,000) on charges of corruption. (Vox Afrique, 04 March 2020; BBC, 05 March 2020)

On 5 March, the American authorities indicted the former chief of the powerful UAW auto workers union in a massive corruption investigation that has tarnished the organisation’s reputation for almost three years. Gary Jones, who led the autumn wage negotiations that resulted in the longest strike in General Motors’ history, and two other UAW officials are accused of embezzling more than a million dollars belonging to the union. (Le Figaro, 5 March 2020); (New York Times, 5 March 2020).

Meanwhile on 17 March, the former Republican Representative of California, Duncan Hunter, who pleaded guilty to a charge of electoral campaign finance fraud, was sentenced to 11 months in a federal prison in a corruption case that ended his political career. Following completion of his 11- month term behind bars, Hunter is to remain under supervised release – the federal equivalent of probation – for three years, ruled U.S. District Judge Thomas Whelan in San Diego. Hunter pleaded guilty in December to a single count of conspiring to convert campaign funds to personal use, an offence carrying a maximum penalty of five years in prison. In view of his guilty plea, the U.S. Attorney’s Office had sought a 14-month prison sentence. (Reuters, 17 March 2020)

On 24 March, Mexico requested the extradition from Spain of Emilio Lozoya, former head of the state oil group Pemex, who is suspected of corruption in the Odebrecht affair. Emilio Lozoya, a very close associate of former Mexican President Enrique Peña Nieto (2012-2018), was arrested in Malaga (southern Spain) on 12 February under an arrest warrant issued by the Mexican justice system in July 2019. He resigned from Pemex, Mexico’s largest public company which is prone to serious financial problems, in 2016. He was initially accused of having received several million dollars from the Brazilian construction giant Odebrecht, which admitted to having paid bribes to a number of Latin American political leaders. These funds were allegedly intended for the Mexican ex-President’s presidential campaign. Mr Lozoya is also accused of having authorised, when he was Director of Pemex, the purchase of a fertiliser factory for around $500 million, an excessive price given the condition of the facilities. (Le Figaro, 25 March 2020);(Mediapart, 25 mars 2020)

Previously sentenced in 2017 to ten years in prison, Goulnara Karimova, eldest daughter of Islam Karimov, the first and very authoritarian president of Uzbekistan who died in 2016, was sentenced on 18 March by the court of Tashkent to thirteen years and four months of imprisonment for criminal conspiracy, fraud, embezzlement of public funds and the illegal possession of foreign currency as well as a castle in France, villas, houses, jewellery and other luxury items. The 47-year-old, who has long been nicknamed “the Princess of Uzbekistan” and the “society lioness”, was a fashion designer, Uzbekistan’s ambassador to the United Nations in Geneva, and a businesswoman who had control over part of the country’s economy. (OCCRP, 19 March 2020;  Courrier International, 19 March 2020)