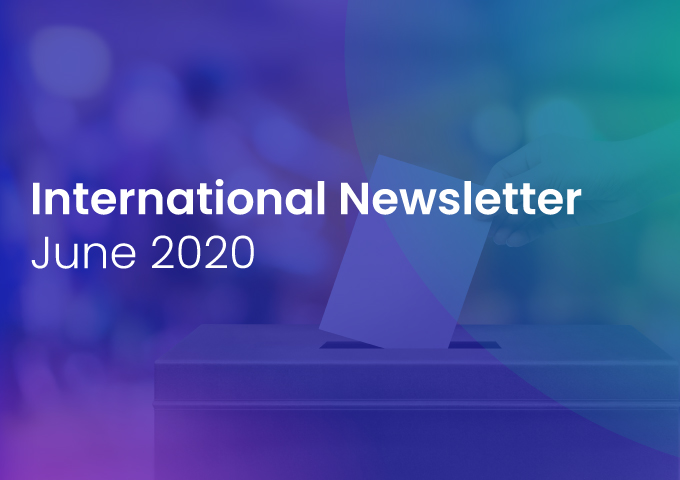 World Whistleblowers Day was held on 23 June 2020. While the French Defender of Rights has recently promoted the idea of granting financial assistance to whistleblowers to compensate their loss of income, the Council of Europe has highlighted that the « Covid-19 pandemic proves how important it is that officials and other persons with knowledge of wrongdoing or malpractice […] that will seriously threaten the public interest should report as early as possible ».

Whether in the world of sport, with the conviction of Indonesia’s former sports minister and the trial of the former director of the IAAF’s anti-doping department, or the healthcare sector with the arrest of Zimbabwean minister Obadiah Moyo, June was marked by examples of unethical behaviour. Given this context, ensuring that people can report such situations safely and at the earliest possible opportunity strikes as a crucial prerequisite in rooting out integrity violations.

The talks initiated in 2016 on a compulsory transparency register for interest representatives at European level resumed on 16 June. Whereas the Council of the EU and the European Parliament had previously refused to restrict their meetings solely to lobbyists on the register, the negotiations now seem to be making progress against a more optimistic backdrop. There remains some tension over definition of the activities concerned, however. The current framework entails a broad definition of lobbying, but a recent proposal would only encompass « activities aimed at promoting certain interests through interactions with any one of the three signatory institutions, its members or officials ». This would therefore exclude indirect lobbying. According to Transparency International, many interactions would fall outside the framework under such a definition, including contracts with intermediaries, use of media or far-reaching communications such as advertising in the European district. (Contexte, 16 June 2020) (Europarl, 16 June 2020)

The Brussels-based NGO Corporate Europe Observatory accuses Pernille Weiss, a Danish MEP of the European People’s Party (EPP), of not declaring her financial links with Danish Shipping, a maritime transport lobby group, when she has worked in the sector. Ms Weiss is criticised for having received funding from the interest group – to which shipowner Maersk belongs – for her 2019 election campaign, and then for having tabled amendments in line with the shipping industry’s wishes. (Contexte, 19 June 2020) (EUobserver, 18 June 2020)

On 1 July, the OECD published the French version of its OECD Public Integrity Handbook, which provides guidance to governments, businesses and civil society. The Handbook explains the 13 principles of the OECD’s Recommendation on Public Integrity, identifies challenges in putting them into practice and outlines advice on how to improve cooperation between entities within government.

On Monday 8 June, the former director of the IAAF’s anti-doping department, Gabriel Dollé, appeared in court on « passive corruption » charges. The French judicial authorities suspect him of having received EUR 190,000 in bribes to cover up doping cases in Russian athletics. He has acknowledged having held up the suspensions of several athletes. (Le Monde, 9 June 2020). For his part, former British athlete Sebastian Coe, the current President of World Athletics, is poised to become a member of the International Olympic Committee (IOC). And yet, last December, when a list of candidates was unveiled which did not include Mr Coe’s name, the IOC President had stated that his nomination had not been selected owing to risks of conflicts of interest associated with his marketing agency, CSM Sports and Entertainment, and his activities in the Olympic movement. His membership has drawn fierce criticism, while an investigation by the Daily Telegraph raises concerns that CSM may have profited from deals with Japanese conglomerate Dentsu, which owns World Athletics’ commercial rights. (Eurosport, 10 June 2020) (Daily Mail, 21 June 2020)

The investigation opened in 2015 in Switzerland against former FIFA President Sepp Blatter, following undocumented payments made to Michel Platini totalling CHF 2m, has been extended to include the latter. In a letter dated 5 June and signed by prosecutor Thomas Hildbrand, the Swiss federal prosecutor’s office extends its investigation to Michel Platini, who is suspected of being an « accomplice of criminal mismanagement, misappropriation and acts of forgery ». The former boss of UEFA is now viewed as an accused person. (DH, 26 June 2020)

Spain’s Supreme Court has announced that an investigation is being launched to determine whether Spain’s former king Juan Carlos is criminally liable in an alleged corruption case. The former monarch is suspected of having received a commission for the award of a EUR 6.7bn deal to a consortium of Spanish firms for construction of a high-speed rail line between Mecca and Medina. According to the Prosecutor’s Office, « this could amount to a potential corruption offence in international business transactions ». The deeds are believed to have been committed after his abdication in 2014. (France 24, 8 June 2020) (BBC, 9 June 2020)

On 26 June, the Greek Government announced it was seeking compensation from Swiss pharmaceutical giant Novartis, which reached an agreement with the US authorities enabling it to avoid prosecution for corruption in Greece. Novartis and its Greek subsidiary agreed to pay USD 336m to the US authorities as part of an out-of-court settlement. Novartis Greece admitted to paying bribes between 2012 and 2015 to Greek public hospital employees to ramp up sales of its pharmaceutical products. According to the Greek officials-led investigation, the artificial inflation in Novartis’ revenues in Greece cost the State around EUR 3bn. (Le Figaro, 26 June 2020) (Greek Reporter, 26 June 2020)

On Wednesday 17 June, Rifaat al-Assad, the uncle of Syrian President Bachar al-Assad, was sentenced by a French court to four years in prison for organised money laundering, misappropriation of State funds and aggravated tax fraud. The court also pronounced the seizure of the vast, fraudulently acquired property portfolio in France, estimated to be worth EUR 90m. The properties seized by the French authorities include two Paris townhouses, some forty apartments, a château and a stud farm in the Parisian region. (France 24, 17 June 2020) (BBC, 17 June 2020)

The President of the Tunisian Authority Against Corruption (INLUCC), Chawki Tabib, accuses Tunisia’s Prime Minister Elyes Fakhfakh of « violating the law and the Constitution ». He faces allegations of having retained his leadership of five companies while already in office. Elected in February, he apparently delegated management of his shares and stepped down from the board of directors of one of the companies between April and May. However, a major public tender has been awarded to one of these companies, specialising in waste recycling. Worth TND 44m (EUR 14m), this contract was reportedly signed in April 2020. By Mr Tabib’s reckoning, Mr Fakhfakh’s shares have doubled in value following the contracts secured with the State. The Prime Minister has promised to resign if wrongdoing is proven. (Le Courrier de l’Atlas, 30 June 2020) (Reuters, 30 June 2020)

On Wednesday 24 June, an Algerian court handed down tough sentences against former high-ranking officials and an automotive sector chief during a new corruption trial harking back to the Bouteflika era. Two of the 17 defendants have been acquitted, while the other 15 have received prison terms ranging from two to twenty years. Charges against them included « laundering and transfer abroad of capital from criminal earnings », « corruption », « trading in influence » and « pressure on public officials to obtain undue privileges ». Ahmed Ouyahia, who was Prime Minister under the ousted President Abdelaziz Bouteflika, was sentenced to 12 years in prison. (Ouest France, 24 June 2020) (Bloomberg, 24 June 2020)

In a landmark trial, on Saturday 20 June, Vital Kamerhe, former President of the National Assembly and Chief of Staff to the President of the Democratic Republic of Congo (DRC), Félix Tshisekedi, was sentenced to 20 years in prison, the maximum sentence, for embezzlement of public funds and aggravated corruption. He will also be banned from running for the presidency for 10 years. This is the first time such a high-ranking politician has been convicted on such charges in the DRC. Mr Kamerhe and his co-defendant, Lebanese businessman Samih Jammal, were found guilty of embezzling nearly USD 50m earmarked for financing prefabricated homes as part of the emergency 100-day programme launched by the Head of State, after he took office on 24 January 2019. (Le Monde, 20 June 2020) (BBC, 20 June 2020)

Zambia’s health minister, Chitalu Chilufya, was arrested on Wednesday on suspicion of illicit enrichment. Mr Chilufya particularly faces accusations of possession of property « reasonably suspected of being the proceeds of crime ». The minister has been released on bail and is due to appear in court on 9 July. If he is found guilty, he risks a five-year prison sentence. (Agence de Presse Africaine, 24 June 2020) (New York Times, 24 June 2020)

Zimbabwe’s health minister Obadiah Moyo was charged with corruption for the improper award of a contract worth more than USD 20m to a foreign company for the supply of screening tests and protection against the coronavirus. His arrest followed an investigation conducted by the Anti-Corruption Commission. The health minister, who managed the coronavirus crisis, is alleged to have paid for 15,000 Covid-19 screening tests, when the country only received 3,700 kits. This new case has sparked renewed anger among Zimbabweans, and the opposition accuses the government of corruption. (France Info, 26 June 2020) (OCCRP, 23 June 2020)

The Parliament of Honduras has approved the new criminal code which reduces the sentences handed down for corruption, despite the opposition’s last-minute attempt to block the text. The crimes set to benefit from reduced sentences under these reforms include misuse of public funds, abuse of authority, trading in influence, fraud and illicit enrichment. The new code also introduces scope for replacing certain prison sentences with less restrictive measures. Some members of civil society regard the new criminal code’s implementation as a further step backwards as far as tackling the Government’s deep-rooted corruption is concerned. (The Washington Post, 26 June 2020)

On 30 June, Indonesia’s former sports minister, Imam Nahrawi, was handed down a seven-year prison term for having accepted USD 800,000 worth of bribes. A Jakarta court found him guilty of corruption in the approval of grants to the national Sports Council, which organises the competitions in Indonesia. The former government official is banned from running for public office for four years and has a month in which to pay back USD 1.3m, or have his assets seized. Mr Nahrawi resigned last year following the charges levelled against him, but continues to insist he is innocent. (Le Figaro, 30 June 2020) (Straits Times, 30 June 2020)