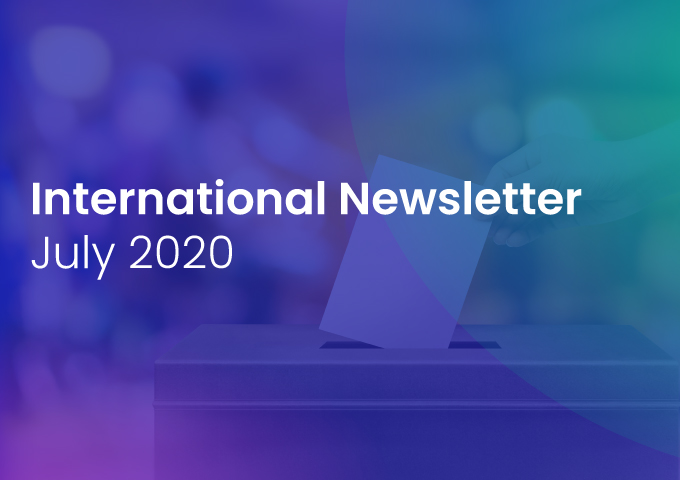 The arrival of summer has not led to any slackening off on the part of the High Authority, which has been particularly active over the past few weeks, or to any fewer concerns over public integrity at international level. In particular, our July letter illustrates three common principles in the promotion of public integrity.

First of all, freedom of the press and the investigation efforts made by such actors as the Corporate Europe Observatory (CEO) and the Organized Crime and Corruption Reporting Project (OCCRP) help citizens and institutions see through mechanisms of influence and detect any unethical practices they might conceal. Secondly, the examples of Tunisia, Malaysia, the United States and Canada, where representatives of the highest offices in the State are held accountable before their countries’ citizens and courts, remind us that any integrity system requires exemplarity at the highest levels of the State. Finally, the importance of independent procedures is emphasised by the potential manipulation of the justice system for political purposes in Nigeria and by the scandals that tarnished the image of the African Development Bank over the past few months before an independent committee ruled that the allegations against its President were unfounded.

COUNCIL OF THE EUROPEAN UNION

On 15 July, the States of the European Union (EU) published the details of a compromise aiming to ensure more systematic publication of Council of the EU negotiation documents. This was partly a matter of formalising practices already implemented with regard to publication of the Commission’s proposals, working groups’ agendas and trilogue documents, including initial positions in and results of negotiations. However, the agreement does not cover so-called “four-column” documents used in trilogues to compare the positions taken by the three institutions (European Commission, Council of the EU and European Parliament) and the compromises being worked out. (Contexte, 16 July 2020) (Council of the European Union, 7 July 2020)

A new investigation by the Corporate Europe Observatory (CEO) focuses on lobbying efforts by industrial concerns attempting to influence the European Green Deal (EGD) project, which provides for a new growth strategy decoupled from use of resources. The EGD has been one of the subjects most targeted by interest representation activities over recent months. According to CEO, “the first hundred days following the launch of the European Green Deal on 11 December 2019 were crucial for orientation of the project’s key components, including climate law, and saw a wave of lobbying activities”. During this period, the main European Commission members responsible for the EGD (President Von der Leyen, Commissioners Timmermans and Simson, their cabinets, and the Directors-General for Energy and Climate) met with representatives of business and industrial interests 151 times (11 meetings a week), as against 29 times for representatives of the public interest (about 2 meetings a week). (Corporate Europe Observatory, 7 July 2020)

On 6 July, European Union Ombudswoman Emily O’Reilly decided to open an investigation into a contract concluded by the European Commission with the American company BlackRock, which is considered to be the world’s most powerful financial institution with 5,500 billion euros in assets, a third of which are in Europe. Her decision followed a complaint from an NGO and 84 MEPs who were worried by the fact that this extremely powerful fund, which, among other things, participates in or conducts audit missions for banks, had been entrusted with a mission bearing specifically on banking supervision, and in particular on the inclusion of “environmental, social and governance factors” in the mission in question. (Le Monde, 7 July 2020) (Financial Times, 9 July 2020)

The President of the African Development Bank (ADB), Akinwumi Adesina, was cleared of all allegations of corruption and mismanagement of the institution by an independent panel of experts chaired by former Irish President Mary Robinson. The panel, chaired by Ms Robinson, who is a lawyer and was also United Nations High Commissioner for Human Rights from 1997 to 2002, found that the whistleblowers had provided no evidence to support their allegations. The allegations in question, which were made in April 2020, nonetheless tarnished the image of the President of the ADB, whose re-election had seemed certain at the beginning of the year, with the African Union’s support and following a major increase in capital in October 2019. (France Info, 30 July 2020) (Reuters, 28 July 2020)

Since the beginning of July, thousands of demonstrators have been gathering in the streets of Sofia to protest against a “mafia climate” and collusion between oligarchs and politicians, which they see as clear evidence of the corruption that has been plaguing the country for many years now. After two weeks of continuing demonstrations, Prime Minister Boyko Borissov finally made concessions, announcing the resignation of three of his ministers on 15 July. But this has not appeased the protesters, who are demanding the resignation of Borissov himself. The protests started when the ruling party had Parliament pass a law to reduce the size of natural protected areas so that space could be freed up for building. (Libération, 23 July 2020) (Reuters, 13 July 2020)

Weakened by a case of conflict of interests, Tunisian Prime Minister Elyes Fakhfakh submitted his resignation on Wednesday 15 July. Earlier in the day, the Ennahda party had tabled a motion of no confidence in the Prime Minister, highlighting ongoing suspicions of corruption against him. Mr Fakhfakh, a former Total subsidiary executive, is under parliamentary investigation for failing to hand over control of his shares in sanitation companies that were awarded major public contracts in recent months. (Le Monde, 15 July 2020) (France 24, 15 July 2020)

In Israel, demonstrators are expressing their opposition to Prime Minister Benjamin Netanyahu, who is accused of corruption, in a wave of social unrest triggered by his management of the Covid-19 pandemic. On 26 July, thousands of Israelis gathered outside his Jerusalem residence to protest against a “corrupt” government that was “disconnected from reality”, took “illogical” measures against coronavirus and, in their opinion, neglected the most fragile of the country’s citizens. In uninterrupted power since 2009, Benjamin Netanyahu was charged with corruption, breach of trust and malfeasance in a whole series of cases in November 2019, an unprecedented turn of events for a head of the Israeli government still in office. (Le Point, 26 July 2020) (Al Jazeera, 22 July 2020)

On 15 July 2020, the American Department of Justice announced the seizure of former Gambian President Yahya Jammeh’s assets on US soil. From his successful coup d’état in 1994 to his flight from the country in 2017, his career was marked by human rights violations, corruption and brutal repression of political opponents. In 2019, the OCCRP used thousands of confidential documents to piece together a detailed version of Jammeh’s private economy, mapping relationships between individuals, government bodies and local and foreign companies in the President’s orbit. Its sources showed how Jammeh had reorientated the Gambian State so that it operated as a bank managed by his office and to his own advantage. (US Department of Justice, 15 July 2020) (OCCRP, 29 March 2019)

Nigerian President Muhammadu Buhari suspended the Chairman of the nation’s main anticorruption agency on 10 July following allegations of misappropriation of funds. Ibrahim Magu, Acting Chairman of the Economic and Financial Crimes Commission (EFCC), has been questioned by a “special investigation committee” looking into allegations “of sales of seized assets and insubordination”, but the authorities have refused to say whether the President’s former close ally has been formally arrested. Ibrahim Magu was one of the pillars of Muhammadu Buhari’s presidency, which had made the fight against corruption one of its main governance objectives. This case, which many believe to be largely political, was the result of a leaked June memo from the Attorney General containing a series of allegations against Magu. Numerous observers have claimed that they were motivated by political interests, given that many members of Nigeria’s financial and political elite would like to see him ousted. (Le Figaro, 10 July 2020) (Financial Times, 16 July 2020)

Hopewell Chin’ono, one of Zimbabwe’s most influential journalists, was arrested on 20 July. A few weeks ago, he exposed a corruption scandal involving the purchase of medical supplies. Chin’ono was charged with inciting public violence, as was opposition politician Jacob Ngarivhume, leader of the Transform Zimbabwe Party. Over recent weeks, Chin’ono had exposed a scandal that led to the dismissal of the Minister of Health, Obadiah Moyo, while the country was having to deal with an explosion in numbers of Covid-19 cases. He was charged with awarding a contract to a company that sold medical supplies at well above market prices, which gave rise to suspicions of corruption and kickbacks. (Courrier International, 22 July 2020) (BBC, 20 July 2020)

Canadian Prime Minister Justin Trudeau apologised and acknowledged that he had made “a mistake” by taking part in discussions on a contract awarded to the WE Charity association although his mother, brother and wife had been remunerated by the association over recent years. However, he insisted that he did not know how much his mother and brother had been paid. The contract, for management of a student grant programme to the tune of almost a billion Canadian dollars, has since been taken away from the association, which obtained it without a call for tenders. The controversy came to a head when WE Charity acknowledged that it had paid Mr Trudeau’s mother and brother almost 300,000 dollars in speaking fees over recent years. The Ethics Commissioner is set to extend the investigation into Mr Trudeau to include Finance Minister Bill Morneau. Mr Trudeau has already been targeted twice by the Ethics Commissioner since 2017, for infringement of the Conflict of Interest Act. (Le Figaro, 16 July 2020) (BBC, 28 July 2020)

Last Thursday, the United States Supreme Court dealt a blow to Donald Trump by ruling that a New York prosecutor had the right to request the American president’s accounting records, including his tax returns. In its first decision, the Supreme Court clearly contradicted Trump, who, citing his presidential status, has refused to communicate a whole series of financial documents to New York State prosecutors. On behalf of the majority, Chief Justice of the United States John Roberts wrote that “No citizen, not even the president, is categorically above the common duty to produce evidence when called upon in a criminal proceeding”, adding that “The president does not enjoy absolute immunity”. In a second decision, however, the Court rejected the democrats’ request that the documents in question be communicated to Congress. (Sud Ouest, 9 July 2020) (CNBC, 9 July 2020)

The verdict handed down by a Kuala Lumpur High Court judge on 28 July is unprecedented in Malaysia’s history: former prime minister Najib Razak, who was removed from power in the 2018 elections, was sentenced to twelve years’ imprisonment for corruption, money laundering and abuse of power and to payment of a fine of 210 million ringgits (42 million euros). This is the first such sentence in a nation whose democratic credit came close to exhaustion during Najib Razak’s nine years of leadership. The former prime minister was charged on seven counts connected with misappropriation of 42 million ringgits (8.4 million euros) from a subsidiary of the 1Malaysia Development Berhad (1MDB) sovereign fund. (Le Monde, 29 July 2020) (BBC, 28 July 2020)

Another news item has put the 1MDB scandal (which involved the misappropriation of some 3.5 billion dollars from Malaysia’s 1MDB sovereign fund to the benefit of its directors and businessmen close to the country’s leadership) back in the headlines. On 24 July, Malaysia undertook to drop legal proceedings against Goldman Sachs Bank in exchange for 3.9 billion dollars in damages. Malaysia had accused the bank of having helped misappropriate the money by organising bond issues to a total of 6.5 billion dollars, on which the investment bank received 600 million dollars in commissions. (RTS, 24 July 2020) (Reuters, 24 July 2020)