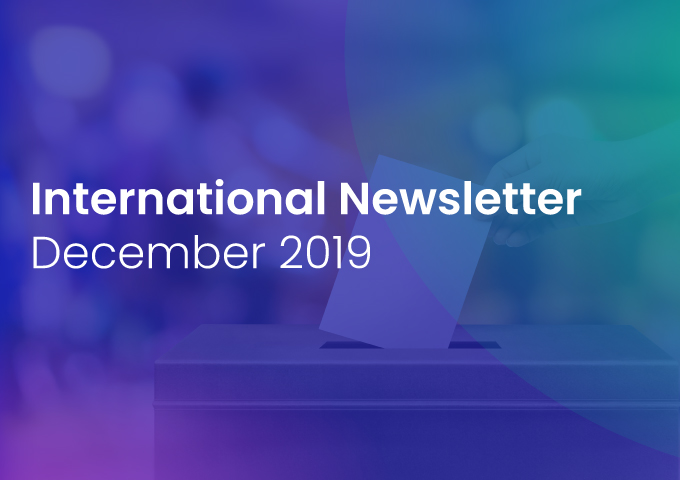 9 December was International Anti-Corruption Day, an opportunity for the UN Secretary-General to emphasise the decisive political impetus provided by young people’s demands for more justice and accountability on the part of policymakers. Although organisation of the first United Nations General Assembly Special Session (UNGASS) on corruption, which is set to take place in New York in 2021, is a sign that prevention of corruption is central to the global political agenda, only the concrete actions and policy choices of actors on the ground will turn the aims expressed into everyday realities.

In South Korea, the creation of an agency responsible for investigating corruption among senior public officials, despite resistance by conservative groups, shows how promises to combat corruption can take concrete form, even in a climate of widespread distrust. Likewise, the determination to bring about political renewal expressed by the Algerian population over recent months, and their demand for a system change, has been further encouraged by the landmark conviction of two former prime ministers for corruption. Conversely, the suspicion of misappropriation of public funds by Flavio Bolsonaro, the son of Brazil’s head of state, calls into question the promises made by a candidate who had made the fight against corruption a priority. The various national contexts continually remind us of the need to internalise standards of integrity in political systems, above and beyond the occasional conviction in isolated cases of corruption.

On Wednesday 18 December, Irishwoman Emily O’Reilly, a European mediator since 2013, was re-elected for a five-year term during a plenary session of the European Parliament held in Strasbourg, with a narrow majority of 320 votes out of 600. It took three rounds before she gained a majority over her main rival Julia Laffranque, an Estonian judge at the European Court of Human Rights. (Le Monde, 19 December 2019) (Europarl, 18 December 2019

Atos, a company that until recently was still run by Internal Market Commissioner Thierry Breton, revised its 2018 lobbying expenditures upwards in the European Transparency Register. After correction, a total of around one million euros now appears on the company’s declaration, 18 times more than it originally declared. There are numerous errors and inconsistencies in the EU’s official transparency register, which is supposed to list the activities of almost 12, 000 registered lobbies working in Brussels. Most may be due to negligence and calculation errors, but there are also a number of companies that revise their figures downwards in order to preserve their image. Contexte highlights the fact that there are not enough human resources available to carry out any substantial checking of declarations completed by lobbyists, as well as the lack of sanctions and the optional character of such declarations. (Contexte, 10 December 2019)

Poland’s compliance with the recommendations issued by the Council of Europe’s Group of States Against Corruption (GRECO) has been deemed “globally unsatisfactory” according to a follow-up assessment published on 16 December of corruption among members of parliament, judges and prosecutors. Poland implemented seven of sixteen recommendations and only one of the six recommendations made in the context of a more recent “ad hoc” procedure bearing on a series of judicial reforms (2016-2018) that had aroused harsh criticism. The European Commission notably initiated disciplinary proceedings against Warsaw. Given the very low level of compliance with its recommendations, GRECO requested the head of the Polish delegation to provide a report on the state of progress of implementation of recommendations currently on hold before the end of 2020. (Council of Europe, 16 December 2019)

The 19th annual conference of the European Partners Against Corruption network (EPAC/EACN) was held in Stockholm, Sweden from 10 to 12 December. Created in 2001, EPAC is an informal network bringing together anti-corruption authorities and police oversight bodies of Member States of the European Union and Council of Europe. Over a hundred participants took part in the event, under the theme “Understanding underlying mechanisms of corruption, global challenges and preventive measures”

The eighth Conference of States Parties (COSP) to the United Nations Convention against Corruption (UNCAC) was held in Abu Dhabi from 16 to 20 December 2019. COSP is the main governing body of the Convention, which, with its 186 signatories, is the only legally binding universal anti-corruption instrument. Fifteen resolutions were adopted over the course of the week; bearing on the work of anti-corruption and audit bodies, parliaments and financial intelligence services, and such issues as public sector integrity, awareness-raising, prevention, environmental criminality and corruption in sport. The ninth session is set to take place in Egypt in 2021. (UNODC, 20 December 2019)

Charged with corruption, former Sudanese President Omar al-Bashir was sentenced to two years in a “community reform facility” on 14 December. The trial concerned funds received from Saudi Arabia and the former head of state risked being sentenced to up to ten years’ imprisonment. Although the ex-president acknowledged that he had received 90 million dollars from Saudi leaders, the trial only concerned 25 million dollars received shortly before his downfall from the Saudi Crown Prince Mohammed Ben Salman. The authorities seized over 7 million euros from the former head of state’s residence. It was the first court ruling concerning Omar al-Bashir, who must above all be tried for “war crimes”, “crimes against humanity” and “genocide” in Darfur. (Le Monde, 14 December 2019) (BBC, 14 December 2019)

Marry Mubaiwa, wife of Zimbabwe’s Vice-President Constantino Chiwenga, was arrested on 14 December following an investigation into fraud and money laundering for an estimated total of a million dollars. According to a document issued by the country’s Anti-Corruption Commission, she is accused of having transferred money from her accounts in Zimbabwe to South African banks in 2018 and 2019, while “hiding or disguising its real use” in violation of exchange control regulations. The money was apparently used to purchase a property in the South African capital Pretoria, along with two luxury all-terrain vehicles, with help from accomplices. (Jeune Afrique, 15 December 2019) (Al Jazeera, 15 December 2019)

The trial of Rifaat al-Assad, Hafez al-Assad’s brother and the current Syrian leader’s uncle, was held in Paris from 9 to 17 December. The “ill-gotten gains” trial was initiated by the Sherpa Association in the context of its fight against transnational financial crime and corruption. It was the first time in history that a member of the Assad clan, which has governed Syria with an iron fist for over forty years, had been indicted. Rifaat al-Assad, a former cacique of the Damascus regime, had fraudulently built up a property empire in France worth almost 90 million euros by laundering millions misappropriated from Syrian State funds when he was exiled from Syria in 1984. The National Financial prosecutor’s Office (PNF) sought a sentence of four years’ imprisonment, a 10-million- euro fine and confiscation of properties seized during the investigation. (Libération, 30 December 2019) (BBC, 9 December 2019)

In Brazil, the Head of State’s son, Flavio Bolsonaro, is suspected of misappropriating public funds and money laundering while he was a Rio state deputy, between 2003 and 2018. As part of an extensive investigation, 24 raids were carried out on 18 December, targeting close friends and relatives of the Bolsonaro family, including Jair Bolsonaro’s ex-wife Ana Cristina Siqueira Valle. The investigation is currently focusing on Fabricio Queiroz, Flavio’s former parliamentary assistant, who is thought to have played a key role in a “rachadinha” system: a practice as illegal as it is common, in which politicians siphon off their (often phantom) employees’ wages, which are paid out of public money. According to the Prosecutor’s Office, suspect cash deposits were made to Queiroz’s account, to a final total of almost 450,000 euros. According to the press, Flavio Bolsonaro used his chocolate shop’s business capital in order to launder these “rachadinhas” and carried out a series of real-estate transactions (Le Monde, 20 December 2019) (BBC, 19 December 2019)

The former Salvadoran president Elias Antonio Saca, convicted for corruption and money laundering, will have to spend ten years in prison and reimburse 260 million dollars, El Salvador’s Attorney General announced on 27 December. The Supreme Court confirmed the sentence pronounced by a Salvadoran court in September 2018 following the trial of Elias Antonio Saca, president from 2004 to 2009, and six of his close collaborators, who had admitted embezzling hundreds of millions of dollars. The six former senior officials tried with Mr Saca in 2018 have received sentences ranging from ten to three years’ imprisonment and ordered to reimburse sums ranging from 900,000 to 15 million dollars. (Le Monde, 28 December 2019) (The Washington Post, 26 December 2019)

Vietnam’s former Minister of Information and Communications, who was once a major figure in the communist politburo, was sentenced to life imprisonment on 28 December for having received bribes from the telecommunications company Mobifone. He was put on trial for having obtained 3.2 million dollars in order to agree to the company’s purchase of a private television firm. In 2018, Dinh La Thang, secretary of the Ho Chi Minh City Party Committee, was the first senior official to be imprisoned as a result of the government’s anti-corruption campaign. For the moment, the operation is targeting former major political figures. A way for President Nguyen Phú Trọng to consolidate his power and clean house among the single party’s ranks, which has resulted in many people seeing his anti-corruption campaign as a political purge under another name. (RFI, 28 December 2019) (Reuters, 28 December 2019)


South Korea has enacted a law bearing on creation of an agency responsible for investigating corruption among senior public officials, despite resistance from the main opposition party and conservative groups. The creation of an anti-corruption agency was President Moon Jae-in’s central campaign promise, with the aim of reforming the country’s judicial system in a climate of widespread distrust of public prosecutors. (The Financial Times, 30 December 2019)

On Wednesday, the Czech Attorney General announced the reopening of the investigation closed in September, on fraudulent use of European subsidies by the Prime Minister, the billionaire Andrej Babis. He is suspected of having tapped European funds intended for SMEs in order to create his hotel complex in 2007, four years before he entered politics. The police believe that Mr Babis only separated his farm temporarily from his Agrofert group in order to take advantage of the subsidies. The Prague Public Prosecutor’s Office cleared Mr Babis and members of his family of all suspicion in September, deeming that their farm met the definition of an SME. According to Attorney General Pavel Zeman, however, “There were weaknesses in the evaluation of the act and also in its legal assessment”. He stated that the investigation now only bore on Mr Babis and his assistant Jana Mayerova. (Le Monde, 4 December 2019) (The Financial Times, 4 December 2019)