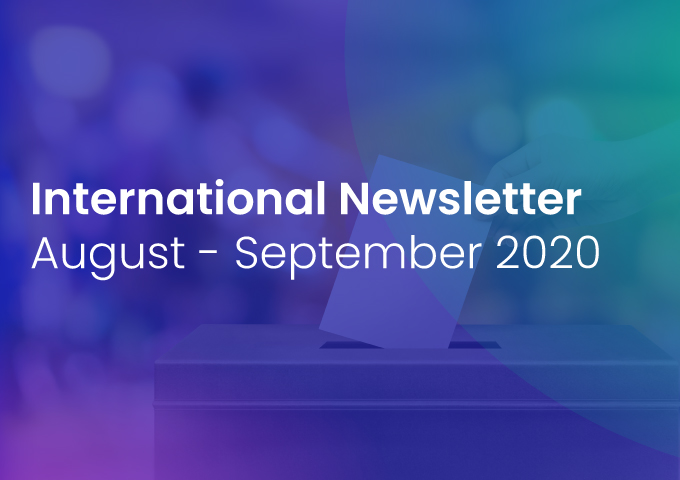 Questions of public integrity are dominating the international headlines at the start of this new academic year. In addition to the investigations for corruption initiated against former government leaders in Algeria and Mexico, for example, are the inquiries into the management of government funds during the COVID-19 crisis in Brazil. Incidentally, Transparency International has written various articles on the impact the pandemic is having on global corruption. The publication of information concerning Donald Trump’s tax returns is raising questions over the actual or potential conflicts of interest of a President who is running for a second term. Within the European institutions, pace is picking up on the mandatory transparency register of interest representatives and discussions have begun on a new independent ethics body.

Clearer progress is being made in the talks on the reform of the European register of interest representatives: after two technical meetings in September, political negotiations are scheduled for 6 October. The definition of lobbying and resources allocated to the register secretariat have been agreed on, but the prohibition on meetings with lobbyists who are not on the register is still being debated. The aim is to reach a compromise on the whole text by the end of 2020. (Contexte, 24 September 2020).

Corporate Europe lambasts the lack of transparency on the part of big tech lobbyists. Their spending in terms of interest representation is rising commensurate with their growth and the increase in the EU’s regulation where they are concerned. In total, the combined lobby declarations of this industry among European institutions amount to €21m in 2019. (Corporate Europe Observatory, 23 September 2020)

The European Commission has published its first annual report on the Rule of Law across all Member States. This covers four main pillars: national justice systems, anti-corruption frameworks, media pluralism and freedom and institutional issues related to the checks and balances essential to an effective system of democratic governance. The report lays bare serious concerns over respect for the Rule of Law in many countries, not least Hungary and Poland. (European Commission, 30 September 2020)

MEPs rebuke a lack of transparency in the European Commission’s negotiations with the pharmaceutical companies. Les Verts and LRM party MEPs say that the negotiations the Commission has been holding these past few months with a view to compiling a diversified portfolio of potential vaccines against COVID-19 are opaque. The negotiating team includes a lobbyist from the European Federation of Pharmaceutical Industries and Associations (EFPIA). The Commission contends that all of the negotiators have completed declarations of interest. (Le Monde, 23 September 2020; Euractiv, 22 September 2020).

Concerning its current discussions about an independent ethics body, the Commission would like it to include the Parliament, Commission and Council alike. Pledged by Ursula von der Leyen, this ethics body still needs to overcome differences on the obligations applicable to European Commissioners and MEPs. A major issue for debate remains the sanctions system that will accompany this body. (Contexte, 24 September 2020)

The EU’s banking regulator is vowing to adopt a stricter stance in monitoring revolving door moves by its staff to the private sector. In 2019, the former Executive Director of the EBA, Adam Farkas, had joined the main financial lobby in Brussels. The European Ombudsman initiated an investigation into the Farkas case. In its response to the Ombudsman, the EBA clarified the criteria that it would apply to assess whether a career move should be prohibited or associated with restrictive terms. (Contexte, 2 September 2020; Reuters, 2 September 2020)

The ECB is poised to start publishing the opinions of its ethics committee on cases of conflicts of interest involving current or past members of its Executive Board, Governing Council and Supervisory Board. (Les Echos, 28 September 2020)

Lamine Diack, President of World Athletics from 1999 to 2015, has been handed a two-year prison sentence for active and passive corruption, breach of trust and money laundering as part of organised crime. His son faces a steeper sentence for securing several million euros through sponsorship deals. (Ouest France, 16 September 2020; Reuters, 16 September 2020)

The Swiss attorney general’s office has called for a 28-month prison sentence against businessman Nasser Al-Khelaifi and a three-year prison term against Jérôme Valcke, former Secretary-General of the International Federation of Association Football (FIFA). These are the first two prison sentences requested on European soil in the string of global football scandals. The prosecutors accuse Mr Al-Khelaifi of acquiring a luxury villa under obscure circumstances, while negotiating the extension of media rights in North Africa and the Middle East. (Le Soir, 22 September 2020; Reuters, 14 September 2020)

Since January, hundreds of people have been reporting corruption cases associated with COVID-19 to the nonprofit Transparency International. In Venezuela, Kenya and Madagascar, police officers and soldiers are thus demanding bribes to allow civilians to stay out past curfew, pass roadblocks or leave quarantine centres. (Transparency International EU, 23 September 2020)

Transparency International also believes COVID-19 is making women more vulnerable to corruption. Accounting for 70% of the workforce in the healthcare sector, women are at risk of corruption as patients and health workers, at a time when COVID-19 is undermining their economic independence and exacerbating inequality in the home setting. (Transparency International, 21 September 2020)

In Germany, Olaf Scholz, the Minister of Finance and SPD candidate for Chancellor in 2021, is under scrutiny for his alleged involvement in two financial scandals. Already facing accusations of negligence in the Wirecard case (embezzlement of two billion euros of the German online payment giant), Olaf Scholz is being questioned about his role in helping a Hamburg-based bank, Warburg, to avoid paying a steep fine for tax fraud. The bank is implicated in the largest ever tax fraud organised in Europe, for a loss of €7.2bn. (L’Humanité, 11 September 2020; Euractiv, 21 September 2020)

In Sofia, 10,000 protesters took to the streets for a special Bulgarian independence festival, with shouts of “Ostavka”, which means “resignation”. For two and a half months, anti-corruption protests have spread across the country, calling for Prime Minister Boyko Borissov and the chief prosecutor to step down. (Euronews, 23 September 2020)

The bribery lawsuit against ENI and Shell in the acquisition of the OPL 245 Nigerian oilfield licence is entering its final stages in Milan. Dating back to the early 2000s, this trial is the largest corruption case to date in the oil industry. For the acquisition of this oilfield licence, the Italian courts suspect the payment of more than one billion dollars’ worth of bribes (Jeune Afrique, 21 September; The Africa Report, 25 September)

Keith Schembri, Chief of Staff to former Prime Minister Joseph Muscat, has been arrested as part of an investigation into bribes received in exchange for the sale of Maltese passports to non-EU nationals. The ‘golden passports’ scheme was being investigated by Maltese journalist Daphne Caruana Galizia when she was murdered (Euronews, 23 September 2020; Times of Malta, 25 September 2020).

Shanker Singham, a lobbyist, has been appointed to advise the UK Government on trade while continuing to work for private clients. The list of clients is unknown. He had already left the Department for International Trade once in 2018 over similar allegations. (Opendemocracy, 17 September)

Pope Francis has dismissed Cardinal Angelo Becciu over his alleged involvement in a London real estate deal. The latter is accused of having invested in a luxury complex, using funds from collections destined for the poor. This case comes on the back of a string of bribery scandals in 2017 and 2018 engulfing the Holy See. (L’Express, 25 September 2020; RFI, 30 September 2020)

Mayor of Libreville Léandre Nzué is facing charges for corruption and misuse of public funds. A member of the Gabonese Democratic Party, Mr Nzué was elected mayor of Gabon’s capital city in February 2019. This case follows on from the spate of prison terms for corruption handed down to close allies of the former President Ali Bongo Ondimba as part of the anti-corruption operation “Scorpion”. (Médiapart, 24 September 2020; Africa Intelligence, 14 September 2020)

On 2 September, Chad’s former oil minister, Djerassem Le Bemadjiel, was detained in custody for allegedly stealing public funds. The State General Inspectorate’s charges against him include bribery, breach of trust and obstructing the administration of justice. The minister’s lawyers claim that the proceedings are flawed, since they were unable to access the report that incriminates him. (RFI, 3 September 2020)

In Algeria, following former President Abdelaziz Bouteflika’s resignation, a sweeping legal campaign to crack down on corruption was launched by Ahmed Gaid Salah (before his death in 2019). Investigations are piling up against the senior officials and high-profile business leaders from the Bouteflika era. The loss for the State Treasury, assessed solely with regard to the trials from December 2019 to September 2020, is reported to be as high as €70bn. The assets Algeria is claiming back regarding foreign accounts are pegged at €3bn. But some leaders are continuing their dealings covertly from their prison cells in an attempt to repatriate their wealth. (Le Figaro, 22 September 2020; Bloomberg, 23 September 2020)

In Brazil, the bribery scandals against the backdrop of the COVID-19 pandemic are stacking up. Government funding has been misappropriated in the purchase of tests, ventilators and setup of field hospitals. Parliament had authorised all levels of government to make emergency purchases without tenders or the usual red tape. According to the Federal Court of Accounts (TCU), out of the €44bn of federal expenditure for the pandemic, less than 8% has gone directly towards intended efforts. (La Tribune, 26 August 2020; France 24, 26 August 2020)

Canada’s Prime Minister, Justin Trudeau, is being investigated by the Conflict of Interest and Ethics Commissioner. Trudeau’s decision to award USD 544 million to the WE Charity to develop a student volunteer grant programme has raised questions. Justin Trudeau’s wife, brother and mother had all previously accepted money from the organisation for giving speeches. (Huffpost, 9 September 2020; National Observer, 11 September 2020)

The disclosure of Donald Trump’s tax returns lifts the lid on a president that has paid very little tax for the past two decades, a group of companies in liquidation and a risk of assessment of some one hundred million dollars. The account details of the Republican contender for re-election also document a number of conflicts of interest. Once installed in the White House, the US President particularly received money from lobbyists or diplomats in exchange for talks with him, or through the sale of franchises in foreign countries. (Le Monde, 28 September 2020; The New York Times, 27 September 2020)

Mexico’s former president, Enrique Peña Nieto, is being investigated for corruption in the wake of the Odebrecht scandal which had rocked the whole of Latin America. This investigation focuses on the funding for Peña Nieto’s political campaign by a Brazilian construction group and the purchase of MP votes to subsequently facilitate privatisation. Former president Peña Nieto outwardly denounced the « cultural problem » posed by corruption. (Courrier International, 14 August 2020; BBC, 12 August 2020)

Australia’s Deputy Prime Minister Michael McCormack denies any conflict of interest when he was both Nationals party president and director of a lobbyist firm. It is not uncommon for Australian elected officials to combine their office with employment in a lobbyist firm. Although the Lobbying Code of Conduct prohibits lobbyists from leading a political party, in reality it is simply a question of removing yourself from the register to get round the rule. (The Guardian, 17 September 2020)

The appointment of Tony Abbott, a former Prime Minister of Australia, as an official trade adviser to the UK has sparked controversy. Defended by Boris Johnson, this appointment is drawing criticism from Australian MPs over possible conflicts of interest. As a former prime minister and leader of the Liberal party, Abbott had access to information about Australian trade interests and strategies. He is now expected to advise the UK on a trade deal with Australia. Australian senators are calling for him to be registered as a foreign agent. (Le Monde, 4 September 2020; The Guardian, 5 September 2020)

A tycoon and outspoken critic of Xi Jinping has been sentenced to 18 years in prison on corruption charges. Ren Zhiqiang, former head of a state-owned property company, was a long-standing member of the Chinese Communist Party. His questioning of the authorities’ handling of the COVID-19 pandemic has not been well received. Placed under investigation in April for « violation of discipline », on 22 September he was handed an 18-year jail sentence and €530,000 fine. His Weibo social media account had already been disabled in 2016 after he criticised a speech by President Xi. (Libération, 22 September 2020; CNN, 22 September 2020)