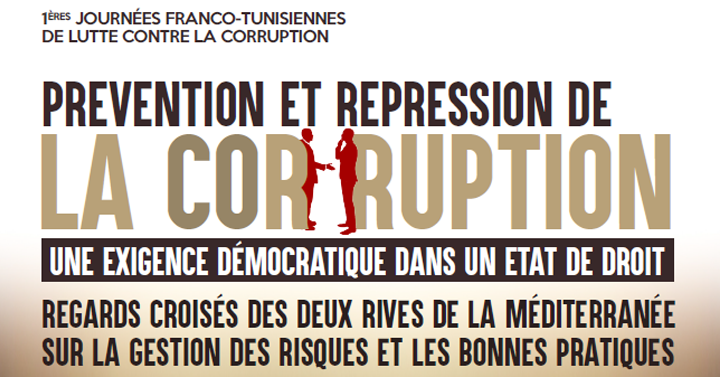 At the invitation of the French Embassy in Tunisia and its liaison judge, Christian Vennetier, the High Authority took part in the first French-Tunisian days for the fight against corruption, on 15 and 16 May 2017. These two days constituted a forum to share experiences and good practices whether in terms of risk management, or detection, repression and prevention of corruption.

This first edition was inaugurated by the French ambassador in Tunisia, HE. Mr Olivier poivre d’Arvor, the Tunisian Minister of Justice, HE. Mr. Ghazi Jeribi, and the Bar President and President of the National instance for the fight against corruption (INLUCC), Mr. Chawki Tabib. Eva Joly, lawyer and French member of the European parliament, pronounced the opening speech of the seminar. She highlighted recent developments in Tunisia with regard to whistleblowers’ protection, topic on which the European Commission recently opened a public consultation, and the leading role of civil society in current developments in the field of the fight against corruption all over the world, from Iceland to Tunisia, passing by Spain.

During these two days, there were six panels. Two of them covered prevention of corruption in local communities on the one hand, and within companies on the other hand.  The two following panels on repression of corruption allowed to talk about the necessity to set up specialized judicial organizations for corruption cases but also to talk about practices in the field of identification, seizure, management, confiscation and recovery of assets from corruption.  The last two panels got back on the role of national institutions and the role of civil society in the fight against corruption.  Debates were productive and allowed the expression of points of view of various actors from public and private sectors, academia and civil society.

The High Authority spoke during the fifth panel, alongside its Tunisian counterpart, the INLUCC, the French anticorruption agency (AFA). Its presentation covered its experience in the control of assets and prevention of conflicts of interest of the 15 800 French highest ranking public officials, while Tunisian authorities prepare several bills notably to create an independent agency for good governance and the fight against corruption and to redefine declarative obligations and control of declarations of assets.