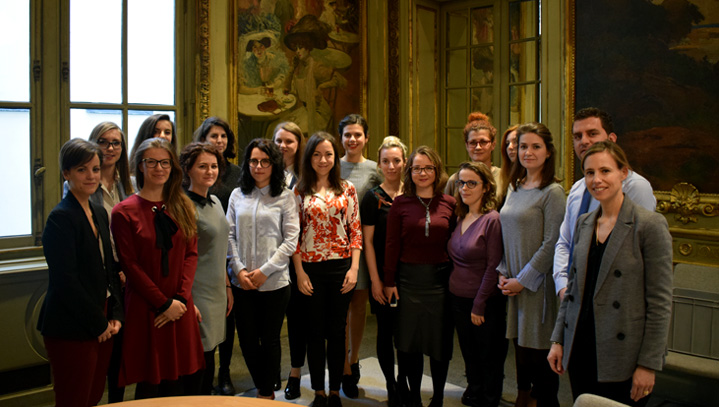 On 9 April, the High Authority received a delegation of 15 Albanese trainee civil servants in the framework of a training visit organized by the French National school of administration over several months. Albania has witnessed several developments in the past few years, notably within Parliament but also for all public officials, on topics related to the adoption of an asset declaration system and the creation of the High Inspectorate for the Audit of assets and conflicts of interests (HIDAACI).

They were welcomed by Anne de Moussac, deputy head of legal, and Emilie Cazenave, international partnerships coordinator. The presented the missions of the High Authority. The delegation had a high interest in the declarative obligations, their control and the sanctions applied in France in case of non-compliance. Questions were asked on the one hand, on how the High Authority’s independence is guaranteed, and on the other hand, on the relations of the High Authority with other administrations in the framework of its investigations.

Beyond the missions of control of assets and prevention of conflicts of interests, a presentation of the the action of the High Authority with regard to ethical counsel to public officials and their institutions as well as its missions of regulation of revolving doors and lobbying was delivered.

Overall, the exchanges highlighted interests in all the developments in the field of promotion of integrity and transparency in public life. The importance given to both the exchange of information and experiences and best practices from other institutions was also recalled, considering the ones of the High Authority in France, but also the role of the National Integrity Agency in Romania that was already presented to the delegation by another speaker in a previous session, in order to give them international comparison elements.