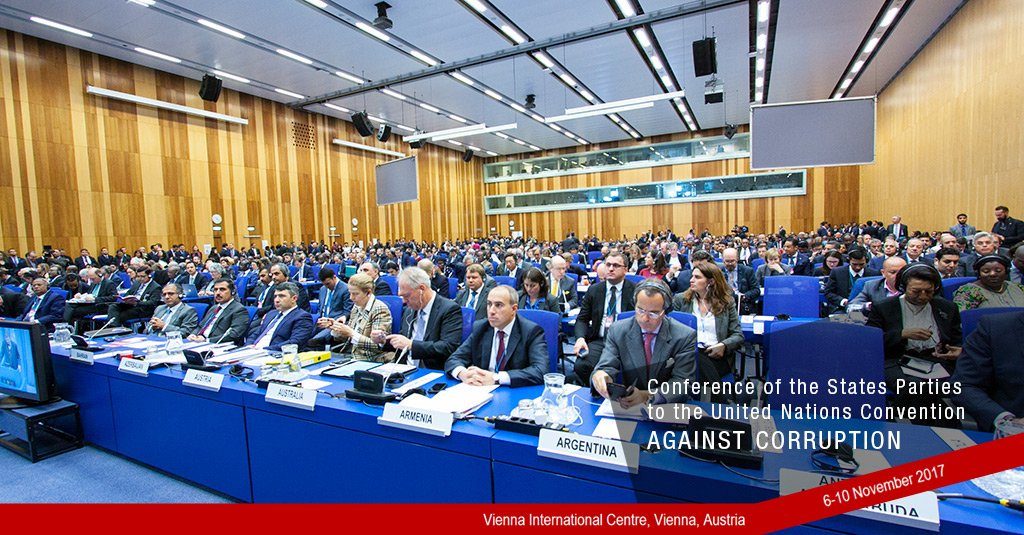 The High Authority, together with the AGRASC and the AFA, was part of the French delegation attending the Conference of State parties to the United Nations Convention against corruption in Vienna, which took place from 6 to 10 November 2017. Upon the invitation of the Permanent representative of France to the United Nations Office against drugs and crime, S.E.M. Jean-Louis Falconi, and the Ambassador in charge of the fight against organized crime, S.E.M. Jean-Claude Brunet, this visit to Vienna was an opportunity to meet, bilaterally, actors tasked with fighting and preventing corruption in countries such as the United States, the United Kingdom, Germany or Japan. This was also an occasion for Emilie Cazenave, international partnerships coordinator, to meet counterparts of the Network for integrity (KNAB of Latvia, NAC in Moldova, NACP in Ukraine, HABG of Ivory Coast, etc.) or delegation met during study visits throughout the year (OCLEI from Mali, ICPC of Morocco, etc.).

The Secretary general of the High Authority, Guillaume Valette-Valla, took part in a side event dedicated to the latest evolutions, results and challenges in the field of implementation of asset and interest disclosure systems in the world, together with experts from the OECD, the World Bank and UNODC and from the GRECO as well as the Ombudswoman of the Philippines and the Head of the anticorruption authority of Argentina. He talked about the lessons learnt after the 4 first years of activity of the High Authority and especially about the cases referred to judicial authorities whether on specific incriminations provided for in the Laws on transparency in public life of 2013 or on other corruption incriminations, about the interest of the publication of the content of the declaration in an open data format or about the strategic choice to develop digital tools to collect and monitor data in-house for instance.

Ms. Laura Stefan, anticorruption expert for the OECD presented the results of a report on creation and implementation of interest and asset disclosure systems, highlighting the evolutions over the past decade as well as the challenges that are emerging, such as the disparities in the existence of a verification system for collected disclosure forms or in terms of publication and access to data that are collected. Lioubov Samokhina, for the GRECO secretariat, presented the GRECO report on the 4th evaluation round on prevention of corruption for members of the Parliament, judges and prosecutors.  Francesco Checchi presented the data of the StaR initiative report of the World Bank and UNODC on national financial disclosure systems in the some 160 countries that have a legislation on this matter. Laura Geler, from the Argentinian anticorruption authority, presented the first experience of publishing public officials’ asset declarations in a open data format and the ombudswoman of the Philippines shared the experience of the institution in the field of integrity in the public sector in the Philippines.

This side event was thus an opportunity to analyse statistically, theoretically and practically speaking, interest and asset disclosure systems and allowed to showcase the results that were achieved over the past decade, but also to mention the challenges and progress to come notably for institutions tasked with collection and control of declaration missions and promotion of integrity.