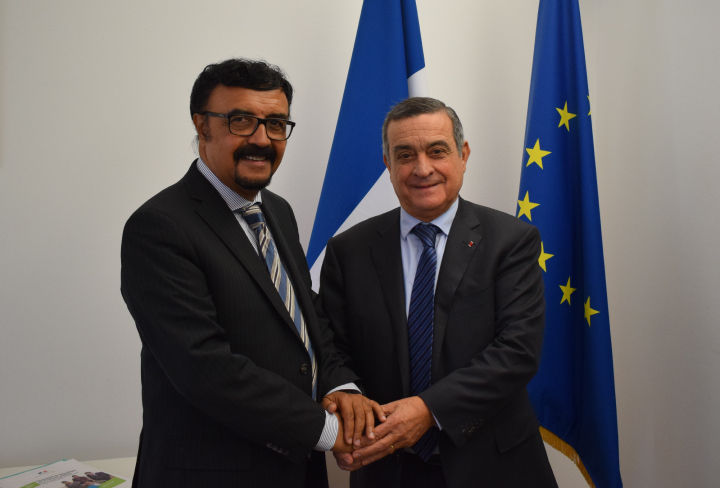 On Thursday, 11 January, the President of the High Authority for Transparency in Public Life, Mr. Jean-Louis Nadal, received Mr. Daniel Jacques Belle, a lawyer at the Supreme Court of Seychelles and Vice-Chairperson of the recent Anti-corruption Commission of Seychelles (ACCS).

This visit was an opportunity to present not only the missions of the High Authority, but also its status and functioning. The independence of the “Collège”, the executive board of the High Authority, that is guaranteed by its members’ terms of appointment and mandate, which are non-revocable and non-renewable, drew Mr. Belle’s attention. Indeed, his Commission also has a collegial executive board, whose members are appointed by the President of the Republic on the recommendation of the Constitutional Appointments Authority.

The discussions focused on the importance of disseminating good practices at all levels to promote a culture of integrity, which is a common goal shared by both institutions.

The Vice-Chairperson underlined that, in addition to a certain lack of resources, since only 9 agents work for the ACCS (50 agents for the french High Authority for transparency in public life), his institution faces the challenge of investigating corruption cases with international ramifications, especially in relation to neighboring Mauritius.

Today, Seychelles does not have mechanisms to disclose the assets and interests of public officials. However, this is a reform path that is of interest to the Anti-Corruption Commission.