This article was first published on the Open Gov Blog.

Corruption is the root of global threats, as it causes underdevelopment and damages the environment, it also nourishes public distrust and political extremism. Every year, 2 trillion dollars is paid in bribes. Over 2.6 trillion dollars representing around 3% of the world GDP are siphoned. Corruption does not only affect the least developed and developing countries prone to poverty. It also affects the developed world, as recently revealed in the Panama Papers. While economic factors are important drivers for corruption, integrity of public officials and decision makers could play a buffer to the embezzlement of public funds.

Open data and transparency have the potential to promote public integrity. The French High Authority for Transparency in Public Life (HATVP), which is responsible for auditing the assets of public officials, preventing conflicts of interests and counseling public officials on ethical principles in France, has published a Contribution on Open Data and Public Integrity in the context of the OGP Summit and the International Anti-Corruption Day. By highlighting examples of how open data leads to greater transparency and public accountability, the study concludes that open data can be a powerful tool in combating corruption, as a complement to effective institutional supervision. 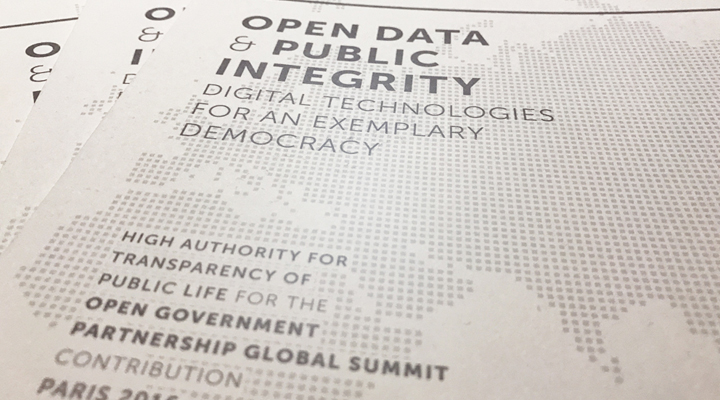 Furthermore, the discussions at the OGP sessions on Digital tools renewing the concept of public accountability and lobbying transparency, both organized by the HATVP, revealed the striking differences in transparency and access to information related to public integrity around the world. While in Romania the publication of asset and interest declarations is guaranteed by law and driven by public administration, in Argentina the situation is quite the opposite. It is journalists of La Nacion newspaper and NGOs work together on the Declarationes juradas abiertas to put pressure on the government to obtain access to the declarations and then publish them in a standardized open data format, which allows public monitoring of the assets of the decision makers.

Countries also have varying degrees of openness of public procurement, activities of parliaments and municipalities, as in some cases transparency is government driven, while in others it is a product of the civil society efforts. The Italian government pushed for opening public procurement data of the Milan Expo 2015 in the transparency and accountability efforts following a scandal. Tunisia had a different experience, particularly after the Revolution, where civil society, notably the NGO Al Bawsala, monitored municipal activity across the country through access to information and through citizen engagement in the decision-making process.

Lobbying transparency could also reinforce accountability of decision makers. In the last 10 years, a dozen of countries adopted national legislation establishing lobby registers. In France, the bill on “transparency, fight against corruption and modernization of the economy” requires that lobbyists register in a digital directory. Globally, the main issue is to reduce the loopholes in the legislation, which lead to grey zones and leave room for lobbyists and decision makers escape responsibility.

In order to produce a significant impact on public integrity, data should be released on assets and interests of public officials, public procurement, lobbying and beyond. Nevertheless, open data should accompany an effective rule of law and an independent and impartial judicial system. Furthermore, civil society plays a crucial role in demanding accountability of public representatives. In the end, on the way towards greater government openness, public officials must ensure greater accountability and integrity.