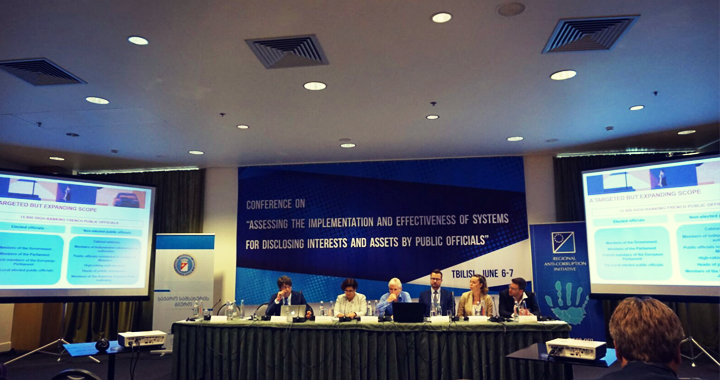 On 6 and 7 June 2017, the High Authority participated in a conference on implementing and assessing the impact of assets and interests disclosure of public officials systems that was co-organized in Tbilisi by the Civil Service Bureau of Georgia, the Regional anticorruption initiative, the Organization for economic cooperation and development (OECD) anticorruption division and the United Nations development program (UNDP).

These two days were articulated along the axes of the report on the subject of the OECD, to be published in 2018 and for which the organization sent a questionnaire and has received answers from about 20 countries so far, and allowed notably practitioner to talk about their national experiences in this field. The discussions allowed to highlight common challenges that agencies and institutions tasked with collecting and/or controlling declarations of assets and interests are confronted with, whether in France, Portugal, Latvia, Slovenia, Romania, Kosovo, or Indonesia, Armenia and Bulgaria for instance. Despite different politico-institutional contexts, all highlighted challenges they met in implementing their system, whether they were technical, interinstitutional or political. Nonetheless numerous initiatives and reforms have been witnessed over the past decade and the debates highlighted the importance of such topics in the public sphere more broadly speaking.

The Secretary general of the High Authority, Mr. Valette-Valla, intervened in the framework of the third panel on processes of verification of the content of the assets and interests declarations. He was thus able to present the technical and procedural developments implemented over a little more than three years. He participated along representatives from the National audit office of Bulgaria, the National agency for integrity in Romania, the Commission for the prevention of conflicts of interests of Slovenia, and an advisor from the UNDP to the anticorruption commission of Kosovo, in a panel moderated by Robert Alan Doig, professor and consultant for the OECD. The questions that followed allowed to debate technical means of inter-connection of different databases in the countries, the different choices in the various countries with regard notably to the definition of functions and persons subject to declarative obligations, their degree of publicity and the format of such publication, etc.

This conference should be followed by other events, notably in order to prepare the publication and then present the report of the OECD on asset and interests disclosure.